Why Should I Lose Weight? One Big Reason—Cancer! 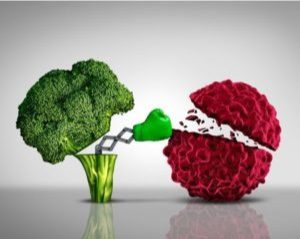 Although you may want to lose weight to maintain a desirable physical figure or, you may be asked to lose weight by your physician based on medical evidence, you may not feel the need for it because you feel fine, even though your fasting blood sugar level is creeping up. In my opinion, the most compelling reason to lose weight is the risk of developing cancer.

Excess fat is now recognized as a contributing factor to American’s cancer toll, ahead of tobacco. Excess fat accounts for as many as 84,000 cancer diagnoses each year, according to the National Cancer Institute, resulting in 14% of all deaths from cancer in men and 20% of those in women.

However, even people who are considered normal weight get cancer. So how can we be sure that by losing weight one reduces the risk of developing cancer or, improves outcomes after a diagnosis of cancer is made? The link between fat accumulation and cancer is helpful only if we can understand how one leads to the other. Then we know what to do and how to do it.

The Diabetes and Cancer Link

One thing that we do know is that there is a link between diabetes and cancer. Studies show that people with type 2 diabetes are twice as likely to develop liver, pancreatic, and endometrial cancer as those without diabetes. Diabetics also have a greater chance of developing colorectal, breast and bladder cancer compared to those without the disease.

One can ask the same question here though.  The association between diabetes and increased incidence of cancer proves cause and effect only if we can understand how elevated glucose levels lead to cancer formation.

Two pieces of evidence help us to understand this process. First, people with fasting blood glucose levels exceeding 100 milligrams per deciliter, especially after age 50 have a higher risk of death from cancer 6 years earlier on an average than people without high blood sugar. Second, the risk of cancer is higher as fasting blood sugar levels go higher. In scientific terms, this is called a “dose response,” meaning that there is a higher expected occurrence of an event when the causative factor is stronger.

This would seem to prove a solid link between diabetes and cancer.  But what is the nature of this link?  What mechanism in diabetes might cause cancer?

As you know, cancer is a condition where cells divide uncontrollably, ignoring the normal physiological signals to stop the process. Genes regulate all cell activities including multiplication. Ordinarily, genes in charge of cell multiplication are activated due to a signal coming from the outside of cell. This could be in the form of a hormone, a nutrient or a protein molecule from another source.

As you age, you acquire more and more gene mutations. Ordinarily, your immune system can destroy mutated genes when detected in a timely manner. But some mutations in genes survive and can result in the undesired formation of a group of cells, but without the ability to keep multiplying. This is called a tumor. However, some mutations set the stage for the development of cancer cells that are programmed to continue the multiplication process endlessly.

All cells need glucose or fatty acids to use as the fuel that produces ATP, the energy that runs the cell’s operations.  When people have consistently high levels of glucose in their bloodstream, such as diabetics do, cancer cells go on a feeding frenzy, allowing them to multiply faster than the immune surveillance system can destroy them.  This is called facilitation of cancer. It can also happen in people who are pre-diabetic, as even though their blood sugar levels are not high enough to be called diabetic, the amount of glucose in their bloodstream is still enough to feed cancer cells quite generously. Ultimately, the multiplication of cancer cells overwhelms the immune system and the cancer spreads.

The evidence of how cancer cells fill up on glucose as their favored fuel source is found in the fact that they create more “transporters” than typical cells have to bring glucose inside them. Transporters are what they sound like—mechanisms that go to the cell wall and suck in glucose from the fluid around the cell. These extra transporters allow cancer cells to grab more glucose than other normal cells, thus accelerating their functions, including multiplication.

Studies using radiolabeled glucose show that rapidly dividing cells such as cancer cells absorb glucose voraciously. When genetically modified mice with propensity to develop lung cancer were kept in a state of high-glucose environment, they were found to develop cancer readily.

The elevation of blood glucose in pre-diabetics and diabetics is the natural signal for the pancreas to release insulin, the hormone that facilitates the uptake of glucose by cells. The problem is, insulin also acts as a growth-promoting hormone of all cells, including cancer cells. This means that diabetics are not only fueling cancer cell growth with high glucose levels, but also helping the cancer cells grow by encouraging greater insulin production.

Together, this clearly suggests that the presence of high glucose and high insulin levels may tip the balance in favor of the establishment of cancer in your body. This is a state that can be prevented by lowering your blood sugar level so as to avoid being diabetic or even pre-diabetic.

The best way to lower your blood sugar is to avoid eating grains and grain-based products. Grains produce the largest amount of glucose in the blood, which if not used for immediate activity, ends up being converted to triglycerides to be stored in your fat cells.  However, the continued overconsumption of grains will eventually fill your fat cells, leaving nowhere for the fatty acids to be stored. When this occurs, you trigger “the fatty acid burn switch” in which your body’s cells begin burning the fatty acids, leaving all the excess glucose in your bloodstream, thus high blood sugar.

Instead, my recommendation is to alter your diet away from grains.  Eat fresh seasonal vegetables, whole fruits, eggs, meat, some dairy, nuts and seeds. Replace your carbohydrate intake of grains with legumes, especially lentils. When your diet supplies about one-third of calories and most of your complex carbohydrate and sugars from plants, nuts and seeds, the usual result is that you not only lose weight but also dramatically reduce your blood glucose levels. In addition, your fasting plasma insulin will also fall, lowering the growth stimulating effect of insulin on any cancer cells that may be in your body.