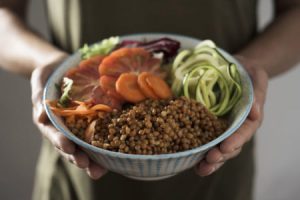 If I had to give you a single recommendation for how to eat without grains or grain products, it would be to substitute lentils into your regular diet in place of them. Lentils have been part of the human diet for almost 5,000 years.

Lentils do contain carbohydrate, but they have a low “glycemic index,” meaning they digest very slowly, releasing glucose little by little into the intestine and bloodstream. This reduces the availability of glucose to your cancer cells soon after a meal.

In addition, just 100 grams of raw lentils can provide 50% of the Recommended Daily Intake of protein, as well as fiber and numerous fiber-associated nutrients.

Before you cook dry lentils, it can be useful to soak them in warm water overnight to reduce the amount of undesirable phytic acid that is present in many of them. Phytic acid can reduce how your body absorbs the iron and zinc in the lentils. Soaking also increases the digestibility of proteins in lentils. This is important because lentils, in general, are rich in essential amino acids. The most common reason many people give for not eating more lentils as well as other legumes— e.g., kidney beans, black beans, garbanzo beans and other beans—is that they fear being “gassy.” Beans create intestinal gas because there is a certain amount of internal fermentation of the resistant starch present in them.

But the truth is, there are several benefits to gas formation in the bowel. First, you should know that the majority of gas produced by the intestinal bacteria is absorbed into the body and expelled through the lungs. It is the remaining volume of gas that people don’t like, but the fact is, this gas helps distend the intestine to start the reflex contraction needed for regular bowel movements. Without this stimulus, fecal material may not escape because there is no force to propel it forward.

For example, when the consistency of fecal material is too soft , which often happens in an infection or when you have food intolerance affecting the intestine, it is the gas that helps you to eliminate the offending agent fast. In other words, gas from lentils promotes healthy elimination, a fact you probably would never have appreciated before.

Lentils contain “resistant starch”
Lentils belong to the legume family that also includes alfalfa, clover, peas, beans, soybeans, peanuts, and tamarind.
100 grams (3.5 ounces, or slightly less than ½ a cup) of dry lentils may contain up to 60 grams of carbohydrate. However, 65 percent of this carbohydrate (about 40 grams) is in the form of “resistant starch,” meaning starch that is not digestible by enzymes in the human small intestinal tract. Of the remainder, about 5% of the carbohydrate composition of lentils is readily (immediately) digestible, but the rest is digested so slowly that it is not able to cause a sudden elevation of glucose (blood sugar) that would have resulted in an insulin surge.

Did you know that grains like wheat, rice, and corn and grain-flour products will feed your cancer cells and increase your blood sugar levels? Let me explain to you why it’s critical that you eat vegetables and cut grains out of your diet if you have cancer or diabetes. Watch this video:

Lentils digest very slowly, releasing glucose little by little into the intestine and bloodstream. Use lentils in place of a starch. In resistant starches, the carbohydrate (rice, corn, or bread) is barely broken down by enzymes and so is not absorbed into the body through the small intestine. Instead, it passes through and reaches the large intestine (colon), where it confers benefits in the form of providing nourishment for the good bacteria there. These bacteria use the carbohydrate to produce small fatty acid compounds called butyrate, essential for the health and well-being of cells lining the colon. A sticky layer of mucous covers the colon lining and provides a medium for immune cells to move and do their surveillance job.

Raw lentil has about 10% dietary fiber, 25% protein and 1% fat. Lentils can provide more than 20% of the Recommended Daily Value of nutrients such as folate, thiamin, pantothenic acid, vitamin B6, phosphorus, iron, and zinc.

This week’s post was an excerpt from my new book Surviving Cancer. Please share with a family member or friend who may need this information.