The Elephant in the Room is Not Added Sugar 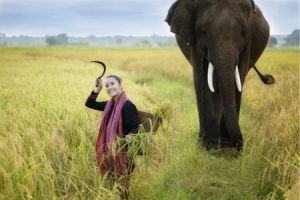 In regard to David Leonhardt’s recent NYT article, How to Stop Eating Sugar, he rightly warns consumers that added sugar plays a significant role in causing the rising incidence of both obesity and diabetes in the US (and throughout the world).  No one can argue with the fact that the sugar industry has erroneously sought to blame fats as the problem in modern diets. Leonhardt tells readers to reduce their consumption of added sugars to less than 50 grams (12 teaspoons) per day.

However, I suggest that the most important food causing the increase in obesity and Type 2 diabetes in the US (and the world) is not sugar, but grains and grain-flour products.

Far more than added sugar, grains produce the highest entry of glucose into the body, more than fruit or vegetables at equal volumes. Upon digestion in the intestine, grains, which are complex carbohydrates, yield an abundance of glucose molecules that are readily absorbed into the blood. These spike the blood sugar level on an immediate basis triggering release of insulin from the pancreas, later causing low blood sugar leading to hunger pangs.  This often brings on a desire for a snack of more grain-based convenient foods between two and three hours after the main meal.

Grain-based foods—breads, sandwiches, pizza, pasta, rice, muffins, snack foods — take people down a slippery slope, feeling they need to eat until their stomach feels heavy. The average diet of an American adult often consists of 50% of calories from grains. Each 4 grams of grain-based carbohydrate is equal to 1 teaspoon of sugar. Eating a sandwich is like eating 6 teaspoons of sugar; a pizza is like 10 teaspoons of sugar; a cup of rice equals 12 teaspoons of sugar. The daily consumption of grains and grain flour products for many people far surpasses the 50 grams they may consume in added sugars.

Humans were not intended to consume so much grain. The human body does not need complex carbohydrates as we can manufacture glucose from other sources. Our ancestors survived on diets of fruits, vegetables, meats, legumes, and sometimes dairy, but very little grain. It is only in the last 100 years or so that modern farming techniques made grains easier and cheaper to grow, mill, and transform into products. (see The Green Revolution blog)

I have studied the science behind diabetes for over twenty years and my conclusions in fact point directly to grains as the #1 enemy in our diets. Proof of this is evident in the statistics. In every country in the world where grains are increasingly grown and marketed in prepackaged and fast foods, and have thus become a larger share of the nation’s diet, obesity and diabetes are on the rise, including the modern phenomenon of obesity with malnutrition.

Indeed, I suggest the evidence against grains as the leading factor in weight gain and high blood sugar is so strong that we must reevaluate the prevailing theory of insulin resistance as the cause of diabetes. There is a normal body biological mechanism that is thrown off balance by the high consumption of grains—and this alone can explain the cause of diabetes far better than insulin resistance.

In my view, we must begin recognizing that the grain industry is aggressively touting the benefits of grains (e.g., multigrain, whole grains, gluten-free – all of which are still glucose-rich complex carbohydrates) while blaming fats and added sugars to protect itself, just like the sugar industry does as Leonhardt points out. Grocery stores are full of baked goods, prepackaged and snack foods that are heavily marketed to consumers. Fast food outlets are ubiquitous in our cities and rural towns.  The grain industry lobbies Congress for billions for dollars in agricultural subsidies to support grain farmers, while the US government ends up paying $300 billion for the healthcare costs of aging Americans suffering the consequences of diabetes.

In short, I applaud Mr. Leonhardt for his warning on sugar and yes, Americans must abandon their added sugar. But while they are doing that, I am making a plea that we must educate our citizens about the dangers of a diet high in grain consumption. If people would limit their consumption of breads, sandwiches, pizza, muffins, cakes, rice, and pasta to just once per week, I am 100% positive we will see a reduction in obesity and instances of diabetes. I also believe we will see a substantial drop in cancer deaths, as grain consumption is equally a factor in feeding cancer cells.